My boys really enjoyed the new ‪Star Wars‬. We knew it would be a part of our family’s story (a memorable part of our 2015 Christmas celebrations). They got Star Wars toys as gifts, naturally. They love their Rey and Finn action figures (which weren’t all that easy to find by the way). 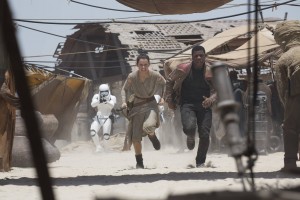 And that’s when I realized why it was so important to have “non-traditional” leading roles in a movie that HUGE. You can cynically dismiss the casting as affirmative action if you want. Checked boxes on a diversity form. You can think Rey is only there as a role model for little girls and Finn is mostly there to inspire people of color. They very well might be.

But they’re also there for my culturally, religiously, ethnically diverse sons who will easily pass for lily-ass white (we managed a redhead even!). My sons who will be given the benefit of the doubt when they’re older. When they’re at the park. They will pass from middle class to upper class worlds with virtually no resistance whatsoever. Probably welcomed.

In that movie and under our tree, my sons saw multiple heroes who don’t look like them. People they want on their sides, as their friends. People in whose shoes they can TOTALLY imagine themselves walking.

Whether they realize it or not (and it certainly didn’t occur to me until FOUR days after unwrapping presents), my sons learned that they can share the hero’s spotlight and it won’t diminish them at all. It may even make their worlds a little bigger.

In the meantime, they can play. They can swing lightsabers and fire blasters (“just not directly at people” is our dumb rule). They can be kids with toy guns who will be allowed to grow up to be compassionate adults who would EASILY recognize another child who was also only playing with a toy gun.