I had an Avengers birthday once.

I don’t mean that we ordered a cake with action figures or that we bought some officially licensed Marvel party goods or some unofficially licensed Hulk piñatas. I mean that I got a chance to visit a real honest-to-goodness movie set back in May 2011 when they were filming the first blockbuster movie.

By that point I had already been the lead designer on three other (fairly successful) promotional packaging programs for Marvel, and the higher-ups decided I could finally go to a partner summit. Partner summits are when the studio invites representatives from all of the various partner brands (soda, candy, video games, fast food, cars, etc) to hear about the new film and get a feel for the story, tone and so on. They also show past examples of what they consider “suc 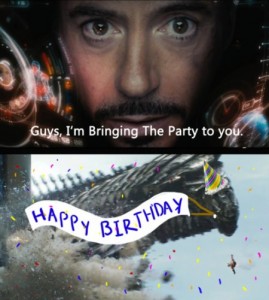 cessfully executed partnerships,” and it felt great to see so much of my team’s work included in their presentations.

The whole day’s program had a shadow of secrecy. Security was very tight, and phones and cameras were not allowed. We sat a short distance from the Helicarrier set on this large sound stage, but I have no photographic evidence to prove it. We listened to a whole morning’s worth of presentations when another speaker was announced: Joss Whedon himself. He talked us through a few of the scenes and the film’s themes, showed us some recently shot footage, and then nonchalantly introduced “the team.”

The side door opened and THE AVENGERS all strolled out and up onto the dais. Because they were ridiculously famous and only a few dozen yards away, the attendees shot up to give them a standing ovation. They were all in wardrobe from that morning’s shoot – I would have to assume they were shooting close-ups as Samuel L. Jackson was in almost full Nick Fury mode. He had the eye-patch, turtleneck and leather trench coat, but he was, oddly enough, wearing shorts. Robert Downey Jr. calmed everyone down by waving and saying something sarcastic and self-deprecating (but not really self-deprecating). I tried to stare at Scarlett Johansson, but I was distracted by the striking height and sleeveless, chiseled arms of Chris Hemsworth.

My internal monologue went as follows:

“She’s right there. Look at her…but look at THOR! Why can I see Sam Jackson’s knees right now? Seriously, Hemsworth is a gorgeous man.”

So that birthday was pretty cool. Two years ago, I spent my birthday in Denver at Red Rocks, performing later that night at Comedy Works (one of the coolest comedy clubs in the country), and then going to the most kick-ass bar/retro arcade. I was enjoying my drinks, not worrying about driving myself anywhere, and playing old Simpsons and Teenage Mutant Ninja Turtles arcade games with cute girls…my 13 year-old self would have been very impressed.

I’ve performed on my birthday a number of times, and I’ve loved every one of those shows. Sometimes there would be cake and some singing on stage. Sometimes the cake would have a “standup” theme (mic, mic stand against an icing brick wall). Sometimes a whole group of people would panic over the next few days, not realizing how the “red brick wall” icing can scare you during (or mostly after) normal digestion.

Almost every birthday I’ve spent as an adult – either on stage and/or with my children – has been better than anything I experienced growing up.

I had some lousy birthdays growing up. There were a few when my parents really tried (or tried too hard – I’m speaking, of course, about the anti-Semitic clown), but there were some lonely ones as well – a late May birthday made it hard to celebrate with school friends. There was the pool party at my apartment complex that had no pool. The apartment managers approved the party date, yet still thought it would be the perfect time to drain the water and clean everything.

It was hard to feel special sometimes.

My birthday also fell on my grandparents’ (my mother’s parents) anniversary, which can be very confusing to a child. “Why are Bubbie and Zadie taking half of my presents? I didn’t realize I wanted an Asian carved cork miniature diorama of pagodas and cranes until I got one…and now they’re taking it?”

My grandfather (“Zadie”) was an amazingly creative man. In addition to his sketches and woodwork, he would use his hands and a pair of pliers to shape thin wire into the most beautifully accurate silhouette portraits. It was an impressive party trick.

While I felt bad at the time about having to live with them (my parents were going through a very rough patch), I’m so thankful for the time we spent growing up in that house. My grandfather trusted me with his jigsaws and drills (I was maybe 8 or 9 years-old – to think of it now almost triggers a heart attack). We would watch a movie like Labyrinth, and then he would draw the characters from memory. It didn’t matter if it was a painting, a building, or a kids movie, he respected artistry and craftsmanship everywhere he saw it. He’s been gone for almost 20 years.

My grandmother (“Bubbie” and later “GG”) lived long enough to meet her first granddaughter-in-law and her first great-grandson. She would cook, fuss, joke and lovingly (we’ll say) spar with my dad. In her later years, we would talk on the phone regularly about standup, my corporate career and the family. I would bring my small family to visit her almost weekly. It was sad to see her move from her large house to a small apartment to a smaller apartment to an elderly community, each move seeing her life’s accumulations dwindle by the roomful. She would open a package of cookies (she had long given up baking), open the photo albums, and tell us stories about growing up in Chicago and other great adventures. 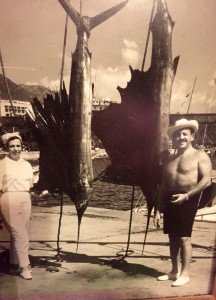 One of my favorites was about the large sailfish that was mounted on the wall of the den of their old home. I had taken it for granted that it had always been there; it never occurred to me that it had to come from somewhere.

While vacationing in Mexico decades earlier, my grandfather wanted to channel his inner Hemingway and go sport fishing. My grandmother tagged along to be polite. The men struggled all day to catch anything while my grandmother gave it the least amount of interest and effort.

She happened to catch the first sailfish of the day, much to my grandfather’s embarrassment. Out of frustrated determination, they stayed out at sea for as long as it took him to catch something as well.

“So guess which one we took to the taxidermist. Thank God he caught it though,” she smiled. “And thank God his fish was bigger than mine. Otherwise we may still be out there…”

I want to thank everyone for the birthday wishes. You made me feel special today. I also want to wish my grandparents a Happy Anniversary. Thanks for letting me share the day with you.

(that’s is really them)