I didn’t have many “favorite” clothes growing up. I simply had things I wore and hoped that they blended in enough to not invite ridicule. While my mom did her best to provide us a decent Back-to-School wardrobe, it certainly wasn’t the nicest stuff compared to the rest of my classmates in Plano, Texas. Jordans, Reebok Pumps and Cavariccis were pipedreams. As dumb as it is to believe, I didn’t set foot inside a Gap or Old Navy until high school. They were way too high-end for us.Message tees, cartoon tees, M.C. Escher tees were also very popular in middle school. Bart Simpson t-shirts were actually controversial. One had to either turn the shirt inside out or put a piece of masking tape over the word “hell,” as in “I’m Bart Simpson. Who the are you?” This was twenty years ago, but more importantly, this was Texas.What I’m saying is one could wear a shirt with a cartoon character on it in middle school without looking like a baby. And because the Tim Burton movies made him super-popular again, Batman tees were fair game.

I had two Batman shirts, and they were my favorite things to wear. One was black with Batman standing stoically on a Gotham rooftop (as per usual). The other was white with a large Joker face and tons of menacing HA’s around him. I wore that particular shirt with pride until someone eventually called me “Fatman,” thinking I didn’t hear him. KaPOW!

Since they were favorites (for a time), I wore them each at least once a week. They were always freshly washed. I wore them so much though that the stitching began to give. Small holes started appearing under the sleeves. I was SURE that if anyone saw these holes, the theory would be that Aaron’s odor must be so rank that it was destroying the fabric. I couldn’t let them be seen, and throwing out the shirts wasn’t an option.

Bad breath, food stains, dog poop on shoes, unpleasant sounds or smells…all to be avoided at any cost. I saw good kids brought down by the most unfortunate of accidents. Being out of shape and having uncooperative hair, I’d just have to do my best. My main priority was to sidestep devastating embarrassment. In this instance, at least I had a plan. Boom!

If I hunched too far over my desk (especially in Math where I sat in the front of the room), my 12-year-old mind was positive that the holes could be seen from the back. The trick then was to always sit up straight, arms in. If I felt the holes in my CLEAN shirt sliding back to where they’d be visible behind me, I would gather the fabric, inconspicuously pinching the seam at the sleeve and pull the underarm of the shirt forward. Very clever of me. There could be NO WAY anyone could say, “There goes Poor Aaron, the kid with the gross holes in his stupid shirts.”

And that’s how things went for some time in seventh grade.

Until I walked down a near-empty hall one day on my way to second period. I must have had an orthodontist appointment or some other dorky reason for my tardiness because it was eerily quiet with most students already in class. There was a pretty girl from my Math class talking to another pretty girl I didn’t know. One had a broken leg, so the other was helping with her books at her locker.

As I pass, I heard a rather loud stage whisper say, “There’s the guy I was telling you about…”

They had spoken of me before. That means I had a reputation…how intriguing.

“…the uptight one who always scratches his pits in class.” 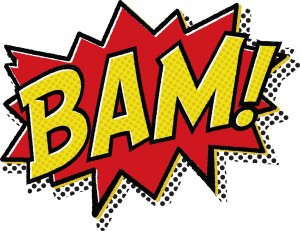