When I discovered Saturday Night Live for myself, “my cast” included Dennis Miller, Dana Carvey, Jan Hooks and the power-duo of Phil Hartman and Jon Lovitz. Growing up as a fan of the show (and almost everything that that crew would go on to do – I was the kid who dragged his poor family to the theater to see Mom and Dad Save the World), I never thought I would ever get a chance to meet any of them. 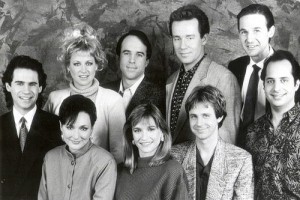 I got my opportunity when Jon Lovitz headlined the Addison Improv five years ago this very week.

When you start out in stand-up, it’s enough just to get work at the club. You don’t get much say in who you work with. You don’t get much work, period. Sometimes the headliners bring their own supporting acts, but mostly the club matches up who they think would make a decent fit for a great show. As a newer comic, your job is to be the best version of you you can be while somehow also being as “decent a fit” with as many different comics possible (more flexibility gets you more stage time, and more stage time makes you a better comic which gets you more stage time and so on).

I didn’t campaign for many specific headliners (again, I just appreciated the booking), but I campaigned for Lovitz. You want to meet your heroes, and you hope that they’re not dicks.

I got the booking and was super-psyched. Without sounding too much like a fanboy, I was hoping for any kind of interaction (some headliners keep pretty guarded). I was also hoping I could get him to sign my NewsRadio caricature (already signed by Dave Foley and Stephen Root). It featured Phil prominently, and I thought he might appreciate it. 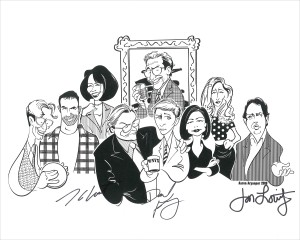 Mr. Lovitz was a bit aloof when I first met him, and I worried that he was going to keep his distance the whole weekend. I quietly introduced myself, told him that I was looking forward to the shows, and then left the green room.

After my first set, I was surprised to see him waiting to talk to me in the back. While the host was making announcements on stage, he was excitedly whispering some heavy-duty compliments. Some headliners don’t even watch the show, and I took for granted that he wouldn’t have watched me. I nodded politely on the outside. On the inside, my inner-fifth grader was jumping up and down. Between shows the next few nights, we talked about comedy and art. I shared my caricature with him.

“You know, Phil did both too.”

Yeah, I did know. And I almost cried.

It was a great weekend. When it has gone well, there’s sometimes an awkward “end of the date moment” after the last show…something along the lines of, “Well, this was fun. We should do it again sometime.” The hope is that a headliner takes SUCH a liking to you, recognizes your comedic genius, and decides that you NEED to be their permanent opening act on the road. The reality is usually just a handshake. You might exchange email addresses. You may actually email each other.

Jon Lovitz asked for my card.

After all of the shows and our conversations, I guess things like my name and my background didn’t quite sink in yet.

Then he dismissively, Lovitz-ly handed my card back to me with a fake disgusted “Oh.”

He was messing with me, and I played along. Out of mock-desperation, I protested, “But my MOM is Jewish.”

And he just as quickly took the card back with a delighted “Oohhh” as if to say, “That’s better.”

Then he clapped a little Lovitz clap and said, “Okay. I’m going to ask for your card, and you’re going to hand it to me, and I’m going to say, ‘Aryanpur?’…”

He was giving me direction for a conversation we just had.

There was no one else in the green room.

So we replayed our conversation, and it was still funny. After the third time – just us in there, mind you – it was downright surreal.

I realized I was rehearsing and then performing a small “sketch” with Jon Lovitz for no one but myself and Jon Lovitz.

There were some other remarkably wonderful and bizarre things about that weekend, but the business card exchange is what I’ll always remember about my time working with an SNL alum.

And maybe because he always seemed like a such a Simpsons/Critic cartoon of a personality to me anyway, I thought the story could use a visual. You really need to hear the story in his voice, but the comic strip might help a bit. 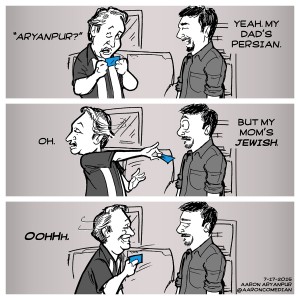