“Surprisingly, it did not suck.”

Those were my dad’s first words to me after my first time on stage at the Improv. Believe me, coming from him that’s high praise. 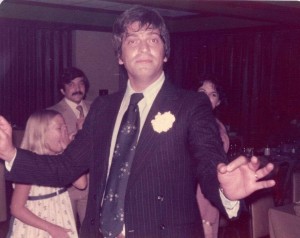 is a funny, funny man with a dry, understated, wicked, multi-layered sense of humor. Growing up, I watched him smirk at the smartest, most subtle stuff and watched him howl at the dumbest stuff.

Part of my daily preschool ritual was checking the mail with him. I would know it was time for our walk when Sanford and Son was over. He loved Redd Foxx, Rodney Dangerfield and Cosby. We watched Bill Cosby Himself so often that it became like a second (or third) language to us. Now I can’t watch Cosby at all anymore, and it makes me sad.

We saw The Naked Gun in the theater. I was stunned when I looked over during the press conference/bathroom scene and watched my dad wipe away tears from laughing so hard. It was marvelous seeing someone who was normally so composed let himself be so free.

I think my dad was amused when I first tried stand-up. We’d talk on the phone and he’d ask, “Any new jokes?” I’d share a new bit I was working on about the day job or something he had said to me when I was growing up.

“But that’s not a joke though. I actually said that.”

I would agree with him. I had found it funny. And strangers did too.

When it comes to my family, at times I feel more like a reporter than a writer.

He’s watched me grow as a performer. He’s seen me destroy a room.

During one of his rare visits to Dallas, I was driving us to a show when a genius idea hit me. I asked if he wanted to join me on stage during my set. I think he started panicking, “But I wouldn’t know what to say.” I told him not to worry, that I would handle all the set-ups and all he’d have to do is respond honestly. We would MUR-DER. He wouldn’t do it, though, and I consider it everyone’s loss.

Joking around, I told him I thought it would be great to have an old fashioned variety show with sketches and musical numbers like Carol Burnett, Benny Hill or Hee-Haw.

“Hee-Haw? Like when the pretty girls pop out of the corn?”

“You NEED to tell me when you get this show.”

Like I wouldn’t tell him if I was in production.

“…I could pop up out of the corn too. Playing the banjo.”

“YES. YES. YOU. COULD. We’re signing you up for banjo lessons yesterday!”

When I recorded my albums this year, he had some more professional advice. “You’re going to want someone to listen to it before it goes out in the world.”

He meant HE needed to hear it before it went out in the world.

“Just because you think it’s funny doesn’t mean everyone will.”

I told him this was material that was road tested over many years in front of thousands and thousands of people.

“Just because thousands and thousands of people think it’s funny, doesn’t mean everyone else will.”

He loves to hear road stories, about how I played for twelve people one embarrassing night and then 300 cheering people the next night.

He means jokes about him. I tell him the newest one, based on an awkward FaceTime experience between him and his grandsons.

“And people laugh at that?”

And he smiles, the writer.