It’s the joyous last day of school.  And as exciting a promise as summer is, there are also the very real anxieties of finishing an elementary school year: the last few tests, the last report card, the good-byes and the all-important signing of yearbooks.

Some idiot kid ruined Max’s third grade yearbook yesterday.  The messed up part was that it was a friend who did it.  A friend who probably didn’t intend to hurt anyone’s feelings.  He probably thought it was a silly little joke.  He scribbled all over my son’s photo, wrote some stuff — nothing too nasty either.  Just enough to be remembered as a jerk.  Just enough to sour the last few hours of the school year.  It wasn’t bullying so much as a bummer, especially if you’re a person of any kind of sensitivity.

Adding to the indignity, Max tells me over FaceTime, “He used my Sharpie to do it too.  And then I think he stole the Sharpie.” 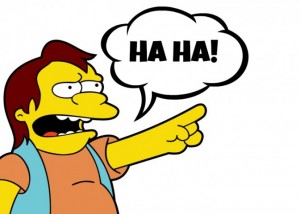 There are real bullies in the world, “TV bullies,” and then there’s the bullying we do to ourselves.

I don’t really remember being technically bullied as a kid.  I do remember being teased on occasion (about my weight, something I wore, for saying something “stupid”), but I also remember saying some ugly, hurtful things to others on my own.  Most – if not all of it – I would take back now, but some of those zingers still make me proud.  It’s amazing I survived middle school without getting my ass kicked more.

I was literally kicked in the back at one point while sitting in the bleachers in my seventh grade gym class – a location that did a great job fostering feelings of inferiority already.  Without any formal martial arts training, I somehow managed to swat at his foot and whine “stop it!”  I learned early on that it did little good to fight back or tell an adult.  Teachers aren’t interested in settling arguments or finding out who started what.  They just see two kids and a problem, and you’re either both ignored or both in trouble.  There is no justice, only potential litigation.  Whatever the teacher sees doesn’t matter; to everyone else in those bleachers or that schoolyard, you’re a wuss.

I remember only one actual fistfight.  The fight, in hindsight, was ridiculously unnecessary.  As a matter of fact, I distinctly remember having the thought, mid-fight, “How the hell did this happen?  How did we get here?”  Out in the courtyard waiting for the buses, I could barely see through the rain.  I didn’t even know the other guy all that well anymore.  All I knew was that he was now “going with” a girl I liked, but I realized – maybe at that very moment – that I didn’t like her enough to be punched in the face.  He was punching me reluctantly because he also knew this stupid display of masculinity didn’t matter.

Spectators don’t care what fuels a fight; they just get excited about “the event.”  Kids began circling and chanting.  I didn’t even know half of these kids, and they were calling for my blood.  I get the feeling that the only two kids who wanted to stop the fight were the combatants.

Two things occur to me now:

First, this was my very own version of every “male dominance” battle since the beginning of time, but only if you imagine the first ram easily being a foot-and-a-half taller than the second, chubbier ram and the second ram cries a little as he slaps the first (see earlier point about lack of martial arts training).

Second, that teachers and assistant principals were nowhere to be found after school in the rain.  Flick a pebble at lunch, and you’ll be asked to write out “I won’t throw rocks” at detention (this really happened).  Get your ass kicked in inclement weather, and no authority figure sees that.

The only things that stopped the fight that day were the bus’s arrival and our apathy.

So minus a few key episodes, I think I grew up relatively unscathed physically.  Having said that, I don’t know why I felt so defensive, so threatened.  In my mind, I was a bullied kid.  The tragedy is realizing that so much time was wasted being fearful.  Whatever the reality, I was always looking for reasons to stand up for myself – or others – then shrinking shamefully when those opportunities presented themselves.  Something happened somewhere that shattered my confidence.

Parenthood serves as a “do-over” for so many people.  We want our kids to have the things we never had growing up: puppies, new clothes, intact families.  Each child becomes like an episode of Quantum Leap where we try to “put right what once went wrong.”  What I’ve discovered, however, is that this is a ridiculous and selfish wish.  When what I wanted and what my sons want are the same, it’s a wonderful feeling.  When nothing syncs up, there are tears.  Truth be told, I’m tired of crying in front of them.

I want my sons to be confident, to be fearless.  When you’re a child, everything is high stakes.  My only hope is that I can help them navigate through what truly matters and what doesn’t.

About six or seven years ago on a father-son dinner date at a “restaurant” that’s more “playground with food,” Max wanted to play — a standard request.  Being the middle of the week, the restaurant was unusually quiet and relatively empty.  Minus a handful of other diners, we had the tables, and then the playground, mostly to ourselves.

This came as great news because playtime in public can be incredibly stressful, for both the child and the parent.  Being nearly three years old then, Max had a history of bumps and bruises courtesy of larger, more obnoxious, and less attractive children.  He also had a slight and understandable fear of heights.  Most of our visits to fast food playgrounds ended with him never climbing the next step, thinking he either couldn’t do it or that he would have no way down again.  There were usually tears.  With the tunnels and slides at our disposal, however, we could relax, explore and enjoy the evening.  With any luck, Max could experience doing something that he once thought was impossible.

That’s when the large, obnoxious and less attractive child showed up and tried to block the tower entry.  He didn’t push or shove, but he crossed his arms and glared at Max.  With a new and different kind of worry, Max came to me, telling me that he wasn’t allowed to play and we should go home.  For no logical reason whatsoever, some punk kid thought it would be fun to deny my son his playtime.

At this point, I would like to commend my own restraint.  It took considerable effort to not fly off the bench and swat this big, ugly bully aside.  He was maybe five, five-and-a-half, and I didn’t see a responsible parent nearby.  Plus I was fairly sure I could take him (I’ve grown a little more confident since middle school).

Instead, I told Max that he was definitely “allowed” to play.

“He said it was for big kids only,” he sighed.

Staring at my feet, Max repeated quietly, “I am a big kid.”

With no further prompting from me, Max went right back up to that step and stood toe-to-toe with the Preschool Police of the Playground.  He looked right in the little jerk’s eyes and said, “I am a big kid.”

The jerk blinked, and then stepped aside.

This wasn’t a “victory” for Max, who has no memory of this and can’t lug it around as a meaningful moment in his life.  It’s important to me though.  I was happy to see it.

While the two of them laughed and played together up in the tunnels for the next fifteen minutes, I sat there proud as well as stunned.  It was an incredibly, stupidly vindicating experience for me, but it was also surprisingly easy.  Was it always that simple and I never knew it?  As a kid, I would have sulked and asked to leave – I wouldn’t feel like playing anymore.  Roughly two-and-a-half years old, Max displayed a bravery that I don’t remember having at any age.

There will always be bigger, stronger and meaner kids out in the world; some people are just wired that way.  I’ve jokingly heard, “Hurt people hurt people.”  All I know is that that night I didn’t feel “bullied” anymore – that the bullies were only as powerful as I let them be.  I felt relief knowing that my son was capable of standing up for himself.  I also wished, no matter what phases he’d grow in and out of, that this was a character trait he’d hold on to.  That he could shrug off the intentional or accidental idiots of the world and not let it ruin the rest of his day.