We found out in early spring that Nichole was pregnant. The news was bookended for me by two comedy-related trips to New York. On the first trip, I was still a young stand-up (25 years old with only two years of stage experience) who was going on an adventure of comedy, camaraderie and career opportunities. On the second trip, the idea that we were going to be parents gave me a whole different sense of who I was and who was waiting for me back home. Those two trips were very important to me – a separate story altogether. For now I’ll say that my prevailing thought on that second trip, for the most part, was “Ho-ly. Shit.”

There’s a delicate stage at the beginning of most pregnancies before the congratulating and party-planning when the excitement AND freak-outs are still private. Is she okay? Is the baby okay? Am I ever going to be ready to handle this?

When will I stop thinking, “Holy shit?” (Spoiler – it hasn’t stopped yet.)

It’s a huge step to say the words aloud to other people though, and we wanted it to be special.

We showed up at Steak & Ale (remember those?) at the scheduled time to discover that both sets of mothers and grandmothers had arrived early. They had plenty of time in the lobby to sit, talk, and – I would have to imagine – do a little hypothesizing. While the ladies got seated, I hung back a bit to compose myself. It kept getting more real with each step. Once you say the words, it’s a whole new reality.

I noticed the restaurant’s radio playing – I SHIT YOU NOT – Creed’s “With Arms Wide Open.” The Universe, again, provided a syrupy soundtrack. I gagged. 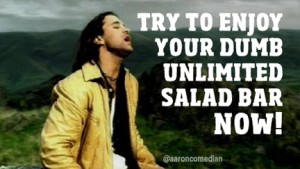 I’m fairly sure everyone already knew what the “big announcement” was going to be – all except the clueless waiter who was insistent on getting our orders.

Nichole and I both loved “The Monster at the End of This Book” when we were young. We found board book versions and decided that they would make great gifts for the new grandmothers and GREAT-grandmothers…”something to keep at your homes for when the new baby comes to visit.”

When we finally said, “Baby,” I saw looks of joy, pride and love in my mother’s face. This woman – a loving yet overworked and sometimes distracted mother when I was a kid, a supportive provider but not necessarily the most involved nurturer – shook with excitement and rose out of her seat.

With tears in her eyes and her arms out, she rushed towards us. I was so happy to see her so happy. I half-stood, bracing myself for the hug I assumed was coming.

She elbowed me out of the way instead to get to Nichole and her tummy.

My new position in the family’s social structure, crystallized.

Nichole has been kicking ass as a mother. Grandma’s been amazing, and Grandma M has been so sweet. I miss “GG” terribly. We used to talk a lot about comedy and life goals. She adored her first great-grandson, and she would have done cartwheels if she had met her second.

And while my shoulder is still a little sore from the “Steak & Ale Shove,” Mom’s Nana Game has been totally on fleek.